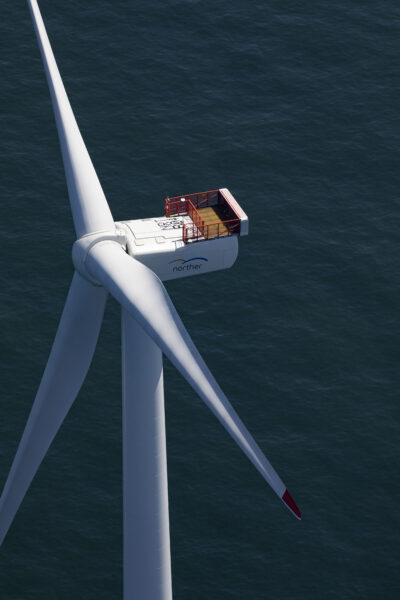 Norther is an offshore wind farm – a total of 44 wind turbines – with a maximum capacity of 370 MW that is situated in the Belgian North Sea, within the Exclusive Economic Zone of Belgium, approximately 23 kilometres from the Belgian port of Zeebruges. The concession was granted at the end of 2009, which is when the actual development of the Project began.

The shareholders in this project are all parties with the necessary expertise and experience in developing renewable energy projects. Norther is ultimately owned by two parties: Belgian Elicio – a Belgian renewable energy producer operating internationally (50%) and Dutch Eneco – a major producer and supplier of renewable electricity, natural gas and heat in the Netherlands and Belgium (50%).

Offshore wind is expected to be a key pillar of Belgium’s future energy mix and is projected to represent around 10% of total generated electricity by 2025.

The Norther wind farm is being build 23 km from the Belgian coast, within a zone southeast of the Thornton Bank, alongside the border with the Netherlands. It stretches out over a total surface of 44 square km. Each year, it will generate 1,394 GWh of sustainable energy, equal to the energy use of almost 400,000 families.

The Norther windfarm is situated 23 km from the coast, southeast of the Thornton Bank alongside the border with the Netherlands.

The northern border of the project area is situated at approximately 1 km from the concession domain of C-Power. 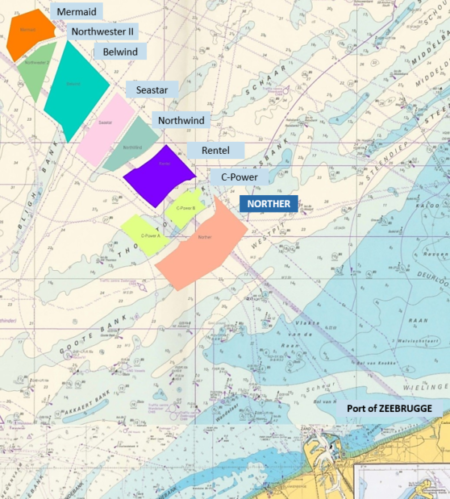 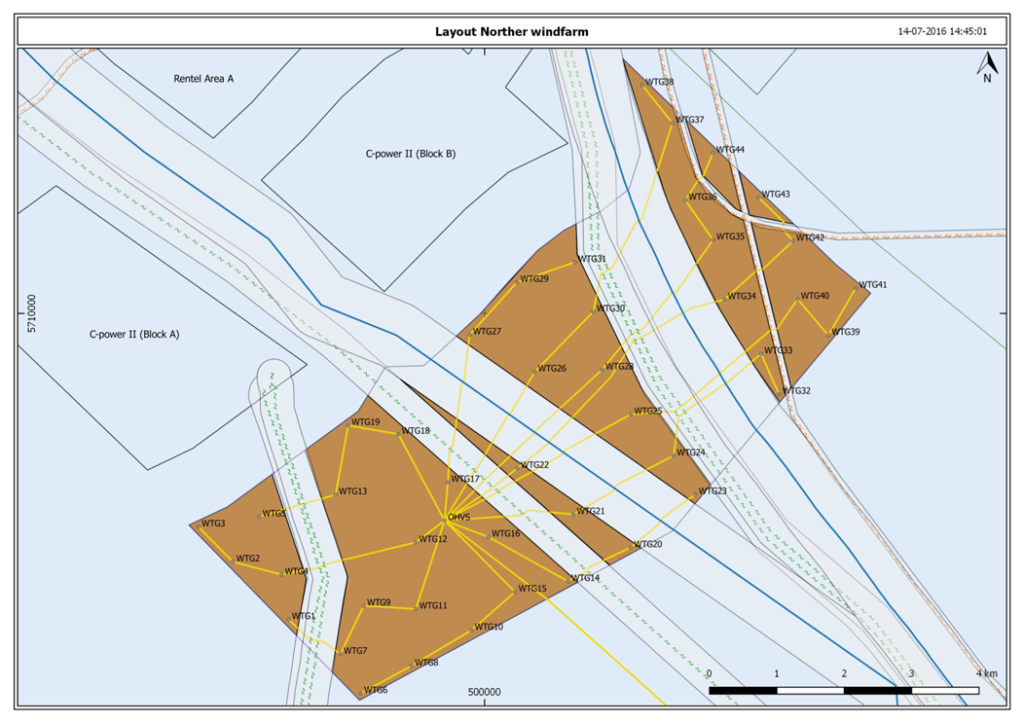 The development of The Norther Projects dates back to 2008 when a concession application was submitted by Air Energy, a subsidiary of Eneco. The concession was granted at the end of 2009, which is when the actual development of the Project began. The Norther windfarm will be built at approx. 23 km from the Belgian coast, within a zone southeast of the Thornton Bank, alongside the border with the Netherlands.

Norther benefits from experienced Sponsors with significant expertise, who have been able to provide project team members with highly relevant expertise from previous roles in both Belgian and non-Belgian projects . 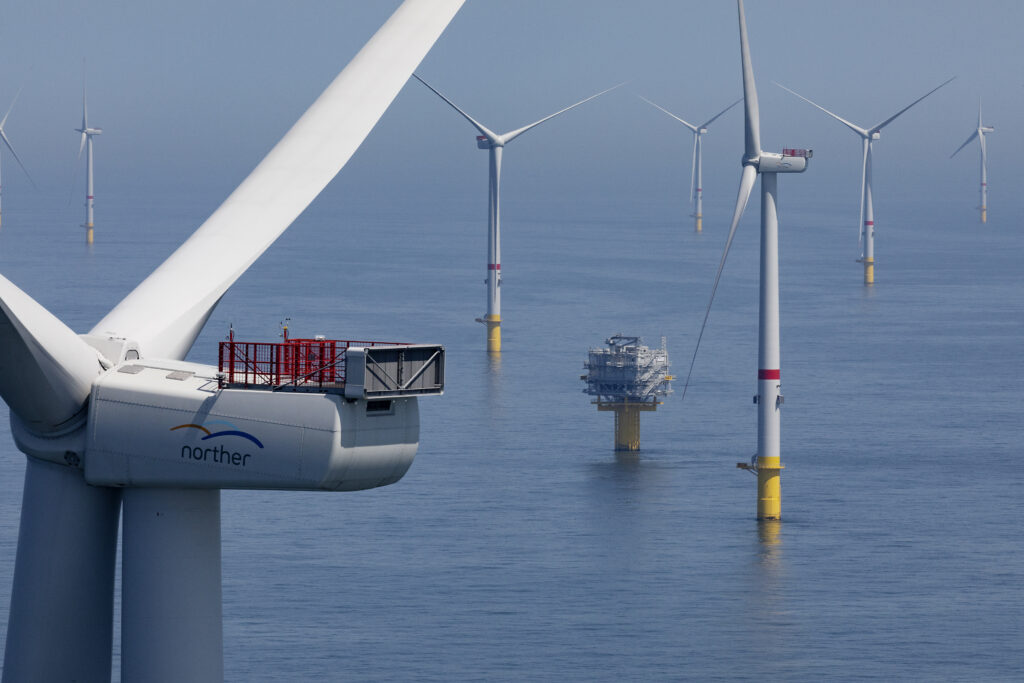 Nethys SA is owned by local municipalities of the Liege province (via Publifin, formerly named Tecteo Group) and is active in
energy, telecommunication and the industrial development sector.

Beyond Norther, the Nethys group is involved as shareholder (via Otary) in the Rentel, Seastar and Mermaid offshore wind projects in
Belgium, and Elicio was actively involved in the development of Northwind.

Furthermore, Eneco will market 50% of the electricity output of the windfarm via a separate power purchase agreement

Are you interested in renewable energy? And are you eager to play an important role in the further expansion of the offshore wind energy in Belgium?

Apply now! Send spontaneous your CV and motivation letter to hr@norther.be, and become part of a professional and result driven team where safety, health, environment and team spirit are key.

BOP combines the leading Belgian players who invest in renewable (wind) energy in the Belgian North Sea.
The BOP wants to support and boost the development of renewable energy by:

The CREG is the federal body regulating the gas and electricity market in Belgium and that advises the competent minister on the granting of concessions for wind farms in the North Sea.

The VREG or Vlaamse Reguleringsinstantie voor de Elektriciteits- en de Gasmarkt (Flemish Electricity and Gas Market Regulator) is responsible for the regulation, the control and the promotion of transparency of the energy market in the Flemish Region.

Elia is Belgium’s high-voltage transmission system operator (30 kV to 380 kV), operating over 8,000 km of lines and underground cables throughout Belgium.

ODE, the Organisation for Sustainable Energy, is the sector organization for renewable energy in Flanders. ODE brings together more than three hundred companies, research centres, universities and organizations in technology platforms and working groups, to exchange knowledge and promote their interests. ODE is the main stakeholder of renewable energy to the authorities concerned.

MHI Vestas Offshore Wind was founded in April 2014, but the company stands on the shoulders of giants. Our parent companies are two of the global leaders in wind power and offshore ventures. The history and track records of Vestas Wind Systems A/S and Mitsubishi Heavy Industries Ltd inspire us and lead us forward.

Norther in the press

Today we realised our very first turbine. N°1 of 44 turbines is installed in the North Sea.

Norther gets first offshore seaweed farm in the world

Norther gets first offshore seaweed farm in the world Consortium wants to grow seaweed on a large scale in offshore wind farm Wednesday, July 15, 2020 — Norther, the Belgian wind farm on the [...]

Wind turbines of largest wind farm in Belgium completed in record time Thursday 2 May 2019 - The 44 Norther wind turbines, the largest Belgian offshore wind farm, have all been installed. This happened [...]